Hey, my name’s Hattie and in this blog post I am going to be telling you about my life as being a young climate activist. 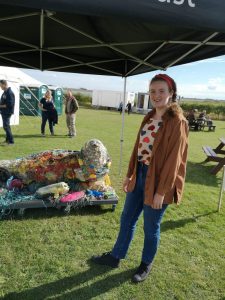 I am 14 and am a Youth Ambassador for the World Wide Fund for Nature (WWF). Social media isn’t really my thing but here is my backstory of how I ended up where I am today. It all started off in March 2019 when I had heard about the Youth Strikes 4 Climate Change led by the wonderful Greta Thunberg who was spearheading the whole movement, and let’s face it one of the most powerful young ladies out there.

I thought to myself, why sit here watching the world crumbling around me when what I really need to be doing is educating myself and others on this issue. 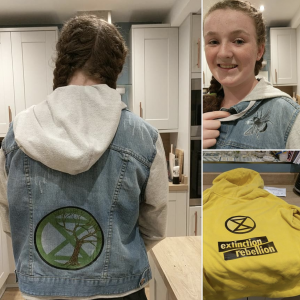 So, after lots of emails after school, battling with teachers and juggling my school work and the activist inside me, I came up with a week’s worth of activities for my school to do, some of which included assemblies to all years across both sites and quizzes for everyone to complete on a Friday morning. I got mixed feelings from that week; some were great and I was over the moon that so many people got inspired to do more research on it, but there was also the negatives. I mean of course you’re going to get it, I am a 6 foot teenager at a school of 2000 who’s doing something different – if there ever was a target, I’m it!

But I wasn’t finished yet, in fact that was just the start of something. So from then I ran a meeting with Jill Bruce, the Women’s Institute (WI) climate change ambassador, where I met Gareth Redmond King from the WWF who invited me to the Mass Lobby in London. I then met with the team at the WWF HQ in Woking where we discussed a new youth engagement project they were starting…

So there it is, I have gone from a 13 year old at home learning about the planet on YouTube to being involved with some really exciting stuff!

I just want to get one thing straight – being an activist isn’t just going ‘What the hell, let’s glue myself to the middle of a road!’ In fact, there is much more than that. I have to swap between a year 9 student who is doing their GCSEs in two years, then there’s the musical theatre stuff that I absolutely love doing, going to rehearsals for the upcoming show, which by the way is Legally Blonde and is going to be great! (oops sorry, back to climate Hattie) I do have to give up some stuff such as dance lessons and sometimes I miss Scouts. I have to squeeze homework in at odd times. Not that I’m complaining; I love what I do and it’s taught me so many lessons in life. It’s all about balance – you have to do what you love, and for me I’m really lucky because the people around me fully support everything that I do and without them I definitely would not be in the position I am today. 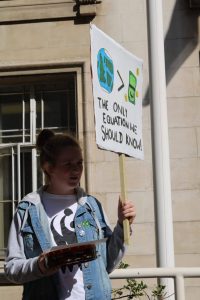 Right, with that out of the way I thought it might be useful to see what sorts of things I get up to. Hopefully it might encourage others to do the same thing. The most powerful tool an activist has is their voice and communication skills.

On Saturday 5th October I went to the Essex Wildlife Trust (EWT) AGM at Abberton Reservoir. I had been nominated by Darren Tansley from EWT for the Young Conservationist Award. It was a really fascinating afternoon with lovely cake, may I just add! It was chaired by Professor Jules Pretty who did a brilliant speech on 10 Things That Have Changed the World; it has given me the inspiration to do another speech on my own version of that. Jules is a professor of Environment and Society at the University of Essex. He was head of the Department of Biological Sciences from 2004-2008, so if you want to know anything based around people and how to live on the planet, he’s ya guy! I really did enjoy that event and was very interesting to hear about climate change from an older person’s point of view… There were lots of old people (no offence but): us youngsters really do have to step up here!

I won the award by the way, which is a bit of surprise as I’m not a conservationist but I guess they haven’t got an activist award yet 😉

Next event was Monday 7th October and that was the Jack Petchey awards at the Civic Theatre. I won this award in school. For people who haven’t heard of this project, it is all about young people achieving their dreams and who have done something over and above the norm in their school environment. Students at school get to vote for who should receive the award so I’m grateful they chose me as it means I get £250 to spend on environmental projects for the school. The evening was so inspiring.

I’m not the only young person who wants to make a change.

There were so many other passionate young people all working so hard to achieve something that is important to them. 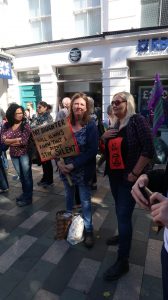 Just over a week later me and my mum (who’s pretty cool and supportive of this) went off to London for the WWF’s annual science lecture at the Royal Institute on Wednesday 16th October. This night was one of the most eye opening and surreal experiences of my life; to start I met Steve Backshall – STEVE BACKSHALL… AAAAAAAHHHHHH!

It was AMAZING, like I was standing there chatting to the brilliant Liz Rossell (who is the best the mother hen ever and looks after me with everything WWF) and then I turn around and he is just standing there and then I was having a full on conversation; can I just say how much of a genuine and lovely person he is, he really does care and is so very interested in what you have to say – I love you Steve! 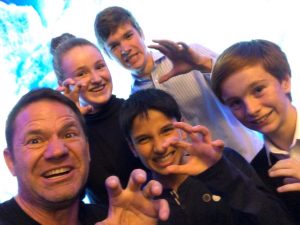 The event was named Where the World Turns and it had some fabulous speakers; one of my faves, other than Steve, was Dr Emily Shuckburgh who gave an amazing talk on the science behind the climate catastrophe. Here are a few photos from the night; to the left is me with the other WWF Youth Supporters and to the right is Dr Emily. The other fascinating talk was by Jeremy Darroch who is the CEO of Sky. It’s the first time I have heard someone from big business commit to such environmental issues in this way. Let’s hope its not all talk!

This was my first formal event with the WWF and I have to say I was buzzing all the way home. It’s evenings like this that make some of the hard stuff worthwhile. Next time I’m feeling a bit fed up with sending yet another email reminding someone of something they haven’t done, I will remind myself that I have this photo of me with Jack Harries! 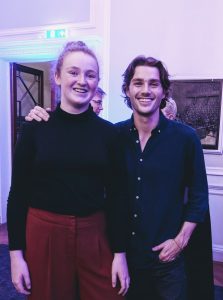 The last event that I attended was Climate Change – The Hot Debate on Friday 18th October. This was the most diverse event that I attended over the past few weeks. I am going to start by saying a huge well done to the 5 students who stood up and spoke because I can completely relate to them. It’s not easy to stand up and speak in front of a crowd and they did it with grace and eloquence. They all put their message across in a positive way and were great, especially as it was made clear that not everyone in the room agreed with each other.

I feel I have to mention the Chair of the meeting, Sir Bernard Jenkin, who acted pretty poorly on that occasion. He sadly made the evening about him and not about the students and the issue of climate change. He started off by telling everyone that he was totally against XR, which was a very poor move as a vast majority of people in that room supported Extinction Rebellion, including myself. He told the group, “I will not stand on a platform with criminals.” This really fired up the group including me and my mum! One man proceeded to ask him if he would have said that about Rosa Parks or the Suffragettes! Someone else shouted out that perhaps he better not take the stage with our Prime Minister. I can tell you I was shaking like a leaf when I stood up and told him that one of the XR demands was to TELL THE TRUTH! Considering what a month I have had that was probably the most rewarding… I find this sort of thing really emotional at the time but I can’t deny I love it!

So there you have it… The past few weeks have been particularly exciting! I haven’t even mentioned the Youth Strikes or meetings with my MP, John Whittingdale, but I hope this gives readers the idea that although there are many reasons to worry about our house being on fire, I have purpose and passion and I’m fortunate that I have support and as long as it lasts I will keep on doing what I do.

It doesn’t need to stop there! Your contributions are welcome!

Send it to media@xrchelmsford.org, we can work with you if you’re looking for support in editing or writing – let us know too.