Vicky Ford, MP for Chelmsford, was one of approximately 40 [updated 10/9] MPs who showed up in some capacity to the event hosted by Extinction Rebellion Sutton. Constituents met Vicky and her team for 5 minutes before she was called away to the ongoing Brexit debate.

Vicky stated, “Climate Change is the most important and significant challenge we face. I am very proud that the UK is the first major economy to commit that it will eliminate production of greenhouse gasses. Everybody will need to work together to deliver this.”

“Extinction Rebellion have an important message but I do not support mass protests as they can put other people off taking positive action on climate change.”

Extinction Rebellion Chelmsford’s reaction to the brief exchange: “We were encouraged that Vicky Ford and her team were ready to receive us today at the Houses of Parliament. While she has a great understanding of the role that technology must play in helping us stabilise runaway global warming we’d like to see her doing more to raise awareness of the climate and ecological breakdown locally across Chelmsford. To use her words, “everybody will need to work together.”

Although Vicky does not support mass protest, she could not give us any alternative suggestions for sounding the climate crisis alarm.”

XR Chelmsford make a request in response: Will Vicky support a Citizens’ Assembly to empower citizens to learn and play a key role in deciding as a nation what needs to be done?

“The more we learn, the worse it looks.”

On receiving a copy of The Clean Growth from Vicky Ford, XR Chelmsford respond to the report’s recommendations for change across various sectors :

MP for Hitchen and Harpenden, Bim Afolami, is hosting a Climate Change Conference for his constituency on 20 September, XR Chelmsford call for Vicky Ford to do the same.

Sophia Cheng, 32, Business owner & Birthstriker: “We were briefly welcomed by Vicky and her team and handed a copy of the Clean Growth report. I would love to see her disseminate this important information to the general public, especially her constituents. Addressing the climate and ecological crisis is going to impact us all. We need to bring people with us.”

Sarah Greenfield Clark, 36, Sustainability Advisor & mother, said: “Science is screaming the scale of the emergency at us. We don’t have time to follow Clean Growth plans. We need MPs to act courageously and stop business as usual. We need them doing everything the can to ring the alarm with us and help citizens understand what this emergency will mean to them. Crop failures. Food shortages. Extreme weather events. Migration of tropical diseases. In the face of these facts, it becomes our moral duty to act now.”

Ellie Buchter, 24, Cleaner, resident and activist: “My overriding impression of the brief conversation we had with Vicky Ford is that she is not prepared to hear the words I am actually saying. To receive the message I want to convey to her. About the urgency of this situation we as a species have caused, and how strongly I feel, as a person, and as her constituent, about this issue. Priorities for MPs must, in our flawed democracy, be on the short term. And it is this which pulled Vicky Ford away to a Brexit debate, instead of on the EMERGENCY for our global climate. But we the people can make a difference, with or without the support of the main proponents of business as usual.” 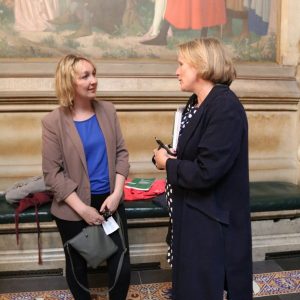 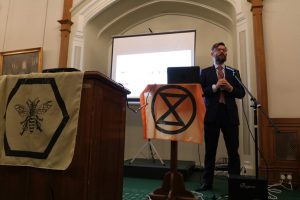 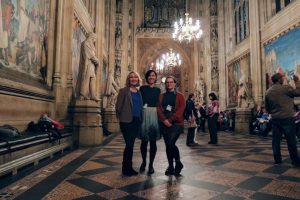