Eight brave Chelmsford souls headed to Hyde Park with their tents in tow to set up camp for the night. After being told that the police were threatening to arrest anyone staying overnight, the news changed and we were permitted to stay. We’re not gonna lie to you – it wasn’t the most comfortable night’s sleep. Some of us were camping for the very first time – and what a time and place to do it! It was a humbling experience; no-one got much sleep, worrying that each siren would mean we would have to hastily pack up.

London slowly quietened down as the traffic faded. We bumped into foxes in the twilight. The half moon was bright, until cloud cover gave our temporary campsite an eerie glow from all the light pollution. 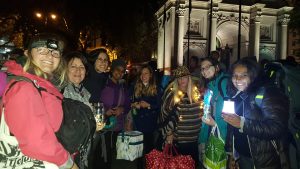 We were up VERY early. But not too early for the Daily Mail to pap us on our way out! Scroll a LONG way down to see if you can spot some familiar faces.

Campers met up with Chelmsfordians who had travelled in as early as 5.30am to get to the site briefing. Stewards had their briefing, those prepared to block roads had theirs. At around 8.30, in two groups, we took our positions at 2 sections on Horse Guards Road – the back of Downing Street, to be specific. Our lorry with our site infrastructure was quickly seized by police. There was a nervous energy in the air but we took the road and, although for a while it seemed we might not hold it for very long, more rebels kept arriving. 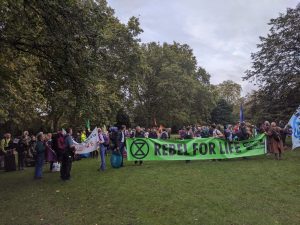 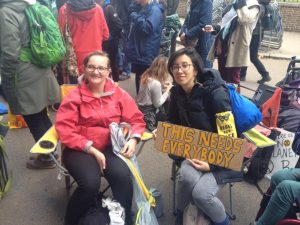 And more XRC members kept arriving too! Our latest headcount is approximately 26 of us!

For the April Rebellion there were 6 of us. And what courage we have in numbers. All our NVDA training, our inductions and our socials meant there really is a strong affinity. What an achievement in the last 6 months.

And it didn’t stop there – in Chelmsford 13 of us headed out to the High Street this lunchtime to leaflet and talk about climate change ahead of tomorrow’s Essex County Council meeting.

They polled the public and the results are as clear as the climate science: We need to act on the science now. 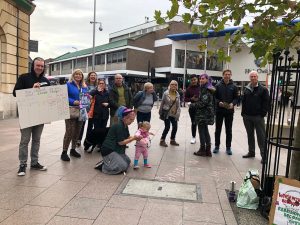 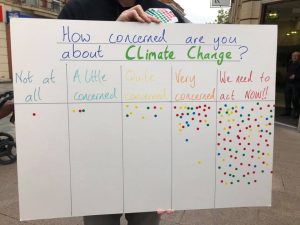 Back in London we asked XR Chelmsford members – why had they made the trip to London for Day 1 of the Rebellion?

This is what they had to say:

“Because together our voices will be heard.”

Rob, 43, father of 1, took time off work today to join the samba band uplifting spirits at all the road blocks

“Because of Marcus, my 3 month old grandson. I don’t want to bequeath him a broken world.”

“I’m here for my kids’ future, for the future of everything. People need to know.”

“I care about the climate and the government needs to take action immediately in order to prevent chaos and deliver a just transition.”

“To make people take notice about the importance of the climate crisis.”

“I want people to wake up and realise we’re about to hit a brick wall. We’ve known about the climate disaster for 30 years. I have been struggling with this most of my adult life, I’d mostly given up until I found you guys [XR Chelmsford]”

“To act in solidarity with my fellow rebels and to encourage the government to take action.”

“I honestly feel like nothing else is going to make a difference anymore. The science is clear. The government aren’t doing anything. I can’t look at stories about species dying without getting emotional.”

“Nobody is listening. Action needs to happen now, so this is the only way to draw attention and get some movement.”

“Because we need a change and I’m sick of being lied to. That’s why I got cold last night in a tent in Hyde Park!”

“I’m scared. And being with other people, seeing other people standing up here helps me.”

“I want to support all my friends here and I want the government to act.”

“Because I have grandchildren.”

“We are the only species capable of systemic learning. What are we doing?”

“This is the last chance to act. We’re heading for a scary future. The more of us that come together to make a difference, the less scary the future becomes.”

“Going to London leaves me torn. My dad is 94 and very sick; I’ve been caring for him in the end of his life. Of course I should be there. But I also feel compelled to rebel in London to express my love for all life and my frustration at the lack of urgent action needed to protect the vulnerable on our now fragile planet.”

“I feel called to be here. When I finally allowed myself to feel the weight of the crisis, there was only one thing left to do – to get away from my computer screen and out onto the streets. Knowing so many people from Chelmsford are here too makes my heart swell. I never would have dreamt this. We have a real affinity, I am proud to be here.” 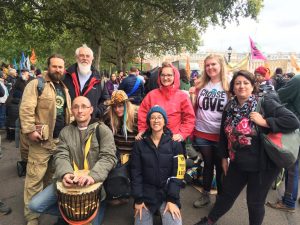 As of 9pm tonight, we are still holding our site. Actor Mark Rylance read out his poetry and musician KT Tunstall gave us an impromptu performance!

We’ll aim to give you a daily update so keep checking back here for more. 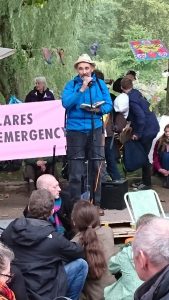