As we enter the summer months, here’s the latest update from our local rebels on their #XR52 clothing boycott…

“I haven’t had any problems with the boycott and I have several charity shop buys to upcycle but I think I need to shop for a round tuit so I can get something started!  I’ll get to it soonish. I have told quite a few people about it too, but no-one seems to want to join me. I ended up buying new sandals I’m afraid, but there was no other choice.  My last sandals had already done two summers and were beginning to crumble.”
Carol 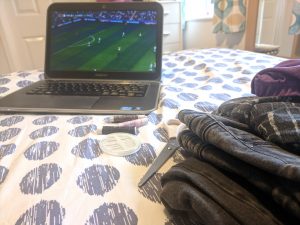 “I haven’t found myself needing many new clothes recently, although I have found a few lovely things in charity shops. My next focus is to repair some of the clothes I already have, such as jeans, tops, leggings and pants that have holes in; I recently had a little sewing session while I watched the Women’s World Cup! My sewing skills are basic at best, but hopefully it will help get a bit more life out of what I already own. Another tip for fellow XR rebels is to cover up holes in clothes with an XR badge!”
Laura

“Over recent years, I have shifted my fashion consumerism to buying clothes ‘with a story’ from ethical brands or second-hand. I do still get that buzz when I’ve purchased something, and still like to ‘treat myself’ every now and then. So this is going to be a challenge for me. But it’s also bringing about some interesting opportunities… When I needed a black leather-style jacket for a bridesmaid outfit I was able to ask my fellow XR boycotters – someone who I had only met briefly, offered theirs up. It was a lovely gesture, I looked the part on my friend’s big day and I avoided a rash purchase AND/OR a big hunt through charity shops. When my mum was thinking of buying me clothing for my birthday I told her about my boycott and we opted for a trip to British Museum to see Edvard Munch’s exhibition and lunch. It was a lovely day out. The boycott has meant I dragged out all my existing clothes, rid myself of items left unworn for a while and I’m getting round to wearing the quite frankly vast collection I already own. That sweater I thought was a bit too loud – I am now loving again after a 5 year hiatus. Yes, it’s multi-coloured, and yes I love it. ”
Sophia 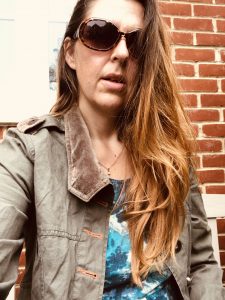 “I found some AMAZING clothes in Oxfam yesterday. Two pieces I am keeping as they are, the rest are for a dress that I’m making. Well when I say making, I’ve got a pattern 🤣 I’ve not really found any difficulties, but I haven’t needed anything so far. This has made me appreciate how much stuff I have to be honest. I speak to EVERYONE about the boycott because I’m an over-sharer. My friends with children of the same age as mine just laugh and we realise that we never bought new clothes anymore anyway.
One challenge I’ve found is regarding footwear. If I’m honest with myself I really, really want some new shoes. Clothes I can give or take but I tend to get a new pair of Converse once a year as I live in them. I’ve just stuck a load of bicarbonate of soda in mine to freshen them up and I’m going to give them a good clean so they feel like new to placate me.”
Lynne

Are you reading to join the #XR52 movement? We’re switching from fast to slow fashion in an effort to reduce greenhouse gases, biodiversity loss and poor treatment of those working in garment factories. Join in on social media using #XR52 #XRChelmsford. See the original post for more information.