Rebels defied by continuing to protest on Day 9 of the International Rebellion as arrests surpass 1400 in London after last night’s ban on Extinction Rebellion protests throughout London.

The BBC reports; “Mayor of London Sadiq Khan has said he is “seeking further information” about the decision to impose the ban and why it was necessary.” Tomorrow morning at 10am lawyers for XR will submit an application for judicial review to the High Court for an urgent hearing later in the day. So watch this space.

Meanwhile, XR Co-Founder, Gail Bradbrook took to the Department of Transport to call on them “to explain their plan to meet a net zero target within the carbon budget of the UK and halt biodiversity loss.”

We were joined by Heart Essex news journalist who interviewed Charlie from Southend and Sophia from Chelmsford. We’ll share links to the report when it’s live. 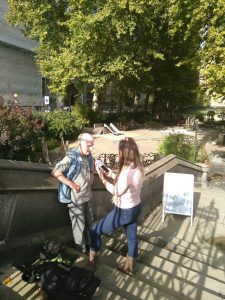 Police were stopping and searching people approaching Lambeth bridge looking for any items that might suggest a lock-on. A feast to highlight potential food insecurity was held, while a vehicle in the road with some rebels locked on blocked traffic coming through. 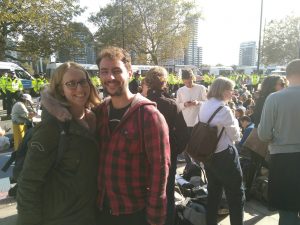 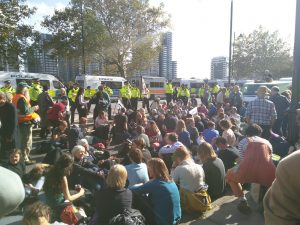 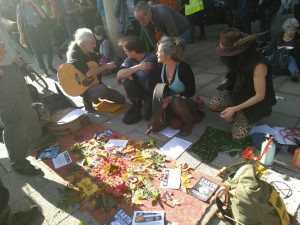 We caught up with camping rebels Virginia and Liam outside MI5

Liam mused, “moving around feels more rebellious than last week and more of the public can see what we’re doing. People have been warm and friendly, there’s been a good atmosphere over at Vauxhall Pleasure Gardens. We managed to stay dry in our tents.”

Virginia added that, “it’s a bit lonelier this week as many Chelmsford people have had to go back home.”

Police moved quickly through Vauxhall Pleasure Gardens clearing the site, thanks to Liam and Virginia who stayed to help track down various XRC’s belongings and haul a bunch of it back to Chelmsford. 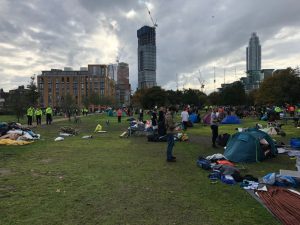 Over at Buckingham Palace, Brian and Jean joined the launch of XR Grandparents! 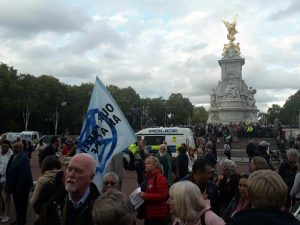 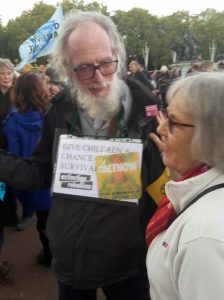 Brian added; “It was an impromptu ‘rally’ with children’s entertainers and lots of bubbles. Loads of arriving dignitaries wondered WTF [what] was going on. Lots of grandparent singing and chanting. Flags and some arrests. Great spirit and solidarity.” See the BBC write up here.

Over in Cambridge XRC rebel and recent arrestee graduated from her Masters and staged a peaceful protest during the  ceremony: “Why did we spend years learning if not to change the world and make it better for all life.” 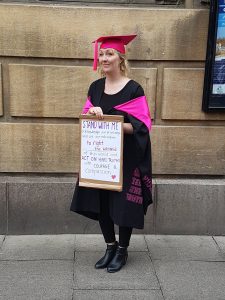 The leafleting team were out AGAIN! 🙌🏼A dry day has meant more votes on this week’s poll.

Rebels are congregating daily to meet members of the public and start conversations around the climate crisis.

It’s also proving to be a regenerative exercise as they grab a cup of tea and coffee afterwards.

Take a look for updates on our Facebook group for the next leafleting dates. 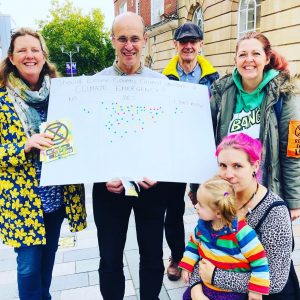 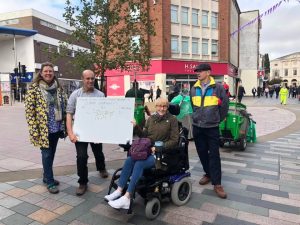 Seven rebels convened this evening to hear Canadian activist and author, Naomi Klein speak about her new book: On Fire: The Burning Case for a Green New Deal 🔥🔥🔥

And it was just what the doctor ordered: a fresh dose of perspective, validation and inspiration. Klein stated there was no coincidence that we are experiencing literal wildfires and climate change at the same time as much of the political world is on fire too. But there is a third fire – the one that burns in all of us. Fire can be destructive but also regenerative, clearing out the debris that no longer serves us; “What are we willing to give up? Everything is on the line now. We have to clear the debris, we have to be on fire.” 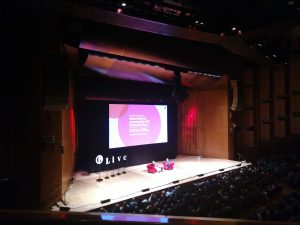 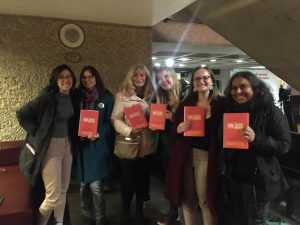 “Greta was the spark. We are the wildfire.”

Lifting a quote from the youth strikers – incidentally the next global climate strike has been announced for November 29th – put it in your diaries. 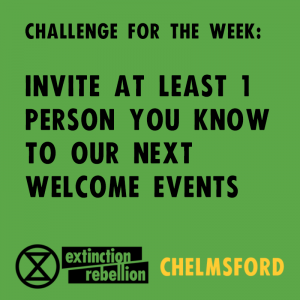 Next week we have two events for newbies: Your challenge should you wish to accept it is to invite at least 1 person you know to 1 of these events.

Pick which one might be more appropriate for the person you’re thinking about – write to them and share your recent experiences and see if they’d like to find out more:

#2 – Heading For Extinction and what to do about it – more formal, presentation goes through the scientific consensus and rationale of NVDA – Wed 23 @ 12.45pm – https://www.eventbrite.co.uk/e/chelmsford-heading-to-extinction-and-what-to-do-about-it-tickets-76884364203

Have you ever seen a broccoli get arrested?