Day 5 and 6: Damp but determined

Day 5 – a regen morning at the Chelmsford den followed by the move to Vauxhall – Chelmsford have set up a few tents in an area by the City Farm (by the ponies!).

The site is now established, with warm food options available and talks, trainings and workshops going on.

Much of the activity was focused on the BBC’s offices at Portland Place near Oxford Circus; there was a brilliant atmosphere and some great speakers.

Andrea was handing out leaflets to curious members of the public. A vast Peoples’ Assembly was hosted as they noted to stay until the BBC agreed to televise the protest. 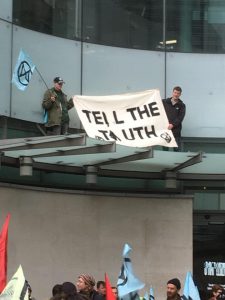 If you’d like to make a formal complaint to the BBC for lack of coverage you can do so here: https://ssl.bbc.co.uk/complaints/forms/?lang=en&uid=117697076#anchor

If you look closely, some XRC rebels make it into the back of this news shot – thanks Virginia for recording it from ITV local London news.

Others came up and participated in training and art workshops available to try in Trafalgar Square – the now main outreach point during the rebellion. Others participated in the disruption in Liverpool Street for the Government Oil and Gas Fiscal Summit.

Update from Chelmsford – on Thursday a local meeting was held, Jim hosted an induction for the 12 curious folks that showed up meanwhile another 10 or so XRC members were planning how they can ramp up their leafleting activity next week. There is also a discussion to start our own Red Rebel Brigade locally, so watch this space.

Meanwhile a local political pamphlet being distributed highlights how climate change is getting up the agenda: 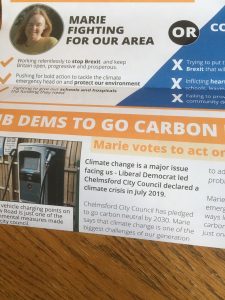 A whole bunch of XRC rebels made it to Marble Arch today to participate in the London Rebellion Extinction March. An estimated 20 000 are said to have turned out in the drizzle. There is Strength in Grief. More than 20 of us from the Chelmsford area! 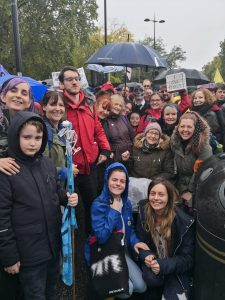 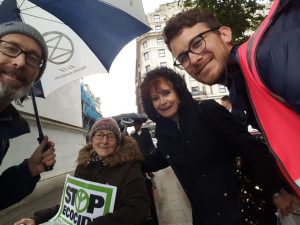 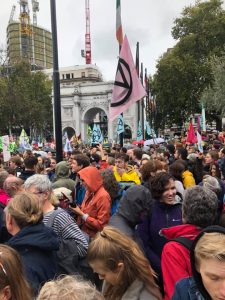 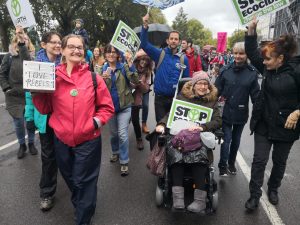 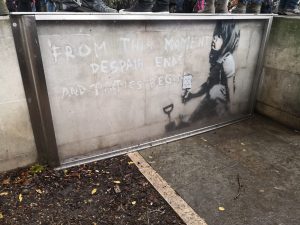 Some of those who had been camping or visiting earlier in the week joined us again and some joined us for the first time:

“It’s a big moment and I want to see Chelmsford, as a smaller group be part of something bigger and so worthwhile”

“I’m here to save the planet, power to the Chelmsford people here”

“I am here because I feel utterly compelled to be here, I couldn’t live with myself if I didn’t show up. We came up together with 5 other people from Chelmsford.”

“I wanted to be part of something big and support Chelmsford rebels.”

“I am concerned about the planet and my grandchildren as I probably won’t live long enough to be directly affected. I came along to the Chelmsford meeting a few days ago and chose to join in today.” 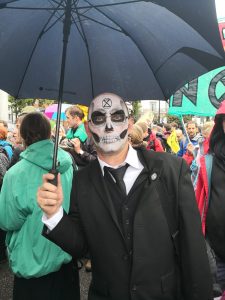 Rob who had joined us on day 1 and played in the samba band for a number of hours returned in a different attire for today’s grief march:

“Last time I wore this suit it was for my brother’s funeral. I am here today to grieve for the planet.” 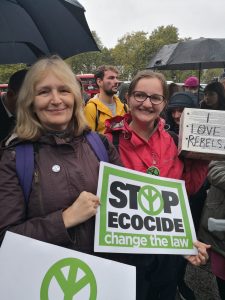 “I’m very proud of my daughter and all my friends are too, they are really impressed.”

Meanwhile Kara joined XR Scientists for an action outside the science museum. It was for the Scientists’ Declaration of Support for Non-Violent Direct Action Against Government Inaction Over the Climate and Ecological Emergency and Signatories. There are more than 380 signatories so far. Following a similar action by lawyers earlier this week.

Kara added, “Had a really positive day with the scientists – had a lovely chat with one of the authors of the IPCC report – about mum stuff – she’s a real person too!”

Some of our week one rebels have started heading back to Chelmsford – thank you for all your hours and energy.

Others are still camping, some campers have returned – brave rebels in the damp conditions.

We now have our post Rebellion events in the diary.

Although the rebellion will still be ongoing, quite a few from Chelmsford will be back.

• So this event is for all rebels who came up to London, at any time in any capacity.

• It is also for anyone that participated in local activities in Chelmsford.

• If that wasn’t you – you are still very very welcome. Connect with the folks who were in London and hear their stories firsthand. Let’s have an exchange and a dialogue.

Monday 21st October – Introduction for the curious – The Plough – 7pm

Now that these 2 other events are confirmed – Monday’s event has shifted focus for newbies and will be an induction. If you’ve been talking to friends and family about the rebellion – this event will be an ideal space for them to come along, find out more and ask questions.

A much more in-depth to work through the emotional toll of the last 2 weeks.