Chelmsford is rising up! September Update

September has been a busy month for Extinction Rebellion Chelmsford.

We kicked the month off with the Time Is Now tour – and it was a great success despite our original speaker Larch Maxey pulling out last minute for personal reasons.

At the Cramphorn Theatre in Chelmsford, local member Sophia did a quick low down on the climate and ecological science. It was then followed by two speakers joined us Mike Lynch-White, International Co-ordinator talked about the rationale of the proposed independent drone action at Heathrow – he was subsequently arrested before the Heathrow action took place. Cliff Jordan from XR Colchester briefed us about plans for October – our region, East of England is teaming up with the Midlands to hold a site together for the Autumn Rebellion.

Hosting our highest profile event to date meant we reached new people – who had ample opportunity to ask questions and find out more. We hosted a panel with our speakers and our local co-ordinators and even ended in a song!

Momentum continued with a full group meeting the following week, twenty people showed up for an induction to find out in more detail what XR is all about, the 3 demands, the principles and values and meet some of the local members.

We then gathered as a large group and talked about ideas and plans for October.

Naomi, Arts Coordinator, encouraged us to sing again – and it was to prove very useful training for the days coming ahead.

A well-timed NVDA training maintained the flow of bringing new rebels up to speed with XR’s core activities: actions and new affinity groups were formed.

Meanwhile three XRC rebels headed up to the Houses of Parliament – but of XR Sutton’s attempt to reach MPs on their home turf – Chelmsford MP Vicky Ford said she would be attending so they headed up to London – there was a brief encounter with Vicky where we were presented with the Clean Growth report. Read more about that over here.

Procession for the Planet

We put the previous weeks’ build up to the test with our second action in Chelmsford – a procession for the planet on Saturday 15 September. Members wore black and convened by Chelmsford train station. We ranged from 18 months to 75 years as we headed down to Shire Hall to read out the Declaration of Rebellion. A symbolic gesture outside our local centres of power that our institutions are not acting with the urgency the science requires. Essex County Council remains at the time of writing to be one of the few County Councils who have not yet declared a climate emergency.

New members showed up and our numbers swelled from 15 last time to more than 40+ this time. Essex Heart Radio and Essex Chronicle showed up. Police were fully notified of our route beforehand and we were accompanied by a number of officers.
Our route was accessible and wellbeing reps made sure we had a debrief.

Emboldened by our greater numbers we also received a relatively positive message from members of the public that we spoke to during the procession. In larger numbers our singing was a little braver too.

We made the front page of the Essex Chronicle! And page 20!

Back to back, the following day XR Families and the Arts team hosted a Family picnic in Central Park.

With plenty of paint (!) children were encouraged to make banners ahead of the Global Climate Strike, there was face painting and impromptu music.

Others used it as an opportunity to catch up or meet new rebels, many of whom had only got involved after the Cramphorn Theatre event.

Previous strangers were airing similar worries about the fate of their children, and the relief in finding others who were also worried and how helpful it has been to take some action around the climate crisis no matter how small.

While there is plenty of room for improvement, for example a few people struggled to find us in the park, it was overall a friendly community-filled afternoon in the sunshine.

Since XR Chelmsford was founded back in February by 4 worried Chelmsfordians – great steps have been made to build a solid foundation and community-centred group.

“I’ve been thinking about getting involved with XR for quite a while. I’d like to get my children involved. Everyone’s been nice and it’s a really friendly bunch.” 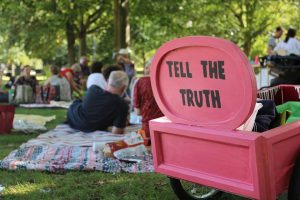 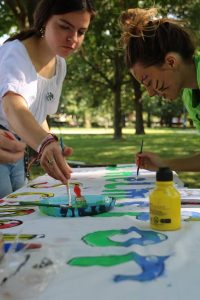 We put it all to the test on Friday 20 September for the Global Climate Strike- having no expectations on how many people showed up – the crowd in total was estimated at 500 – and there’s more on this specific event here.

We now put all our focus on October as we hold a full group meeting on Monday September 30th to get ourselves organised.