Inspired by Greta Thunberg, 1.4 million kids around the world walked out of the school in May and asked for adults to join them on 20th September which is shaping up to be the biggest day of climate action in the planet’s history: everyone from big trade unions to a thousand workers at the Amazon headquarters, and from college kids to senior citizens, are setting the day aside to rally in their cities and towns for faster action from our governments and industries. Find more about Global Climate Strike

Seb and Jonty (children behind the Friday’s climate strike in Chelmsford) in their words about climate change, “Pupils from Chelmsford schools are striking to save the climate. It is important. Without noticing we are polluting the planet and making our world unsafe!”. 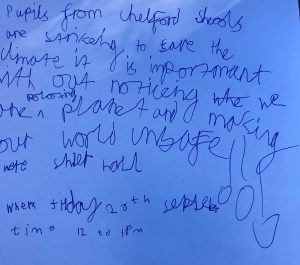 Join us as we support the Global Climate Strike in Chelmsford. The people of the world are taking action to save the planet. Stand in solidarity with the children who strike for the climate emergency.