Vauxhall Pleasure Gardens has been the allocated site for rebels to rest and recuperate. But it is also where much of the training and decision making is going on.

Gail Bradbook spoke in the Global Justice Tent, and debates about the fourth demand around climate justice were had. Training for those new to XR and wanting to learn more about non-violent direct action and their rights are also happening multiple times daily.

Warm food is also provided and supported by hare Krishna. Donations are welcomed. And of course – let’s not forget the washer uppers! 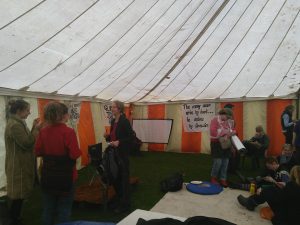 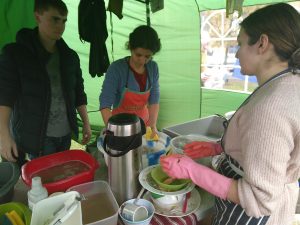 Meanwhile Trafalgar Square is still held and some Chelmsfordians headed there to see what was going on.

“It was amazing to see so much support from the Christian side of my life, especially as the church is usually holds itself away from this sort of thing. We sang songs (usually hymns we had changed with fitting lyrics (like rebelling in the of god) and because we sang ones that most people would’ve heard, people began to join us.

Then the decision was made to head to new Scotland Yard to support the disabled rebels. Being one myself I joined the main part of the march. Meanwhile the bishop (of Colchester) who came with us went to the back of the protest and did “frontline holy communion” for the Christian rebels missing church 🙂

I loved the support for disabled rebels, I felt supported by other rebels. Being young and disabled marginalises you enough; accessibility is ALWAYS a problem and being part of an organisation that DOES take it seriously is nothing short of incredible.”

“I joined the protests in London today to meet more proactive people determined to bring about justice. I joined to help raise awareness and stir emotions, using poetry as catalyst and I joined to teach my kids how to speak up for Justice! To teach them, that just because something is legal, does not mean that it’s right, that rules must sometimes be broken, if those rules are not morally sound”

Kelli, mother of two and poet 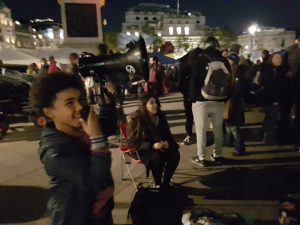 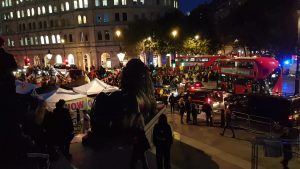 Sally returned to London on Sunday with her two children aged 14 and 12:

“I have been desperate to follow XR since I left you guys at the Love Rebellion. It was such an experience. I wanted to educate my children about the problems with the lack of coverage on what should be our ‘free press’ after being frustrated with the lack of coverage on the news and in the tabloids. I enjoyed a lunch courtesy of the wonderful hare Krishna’s. We all felt the police presence.” 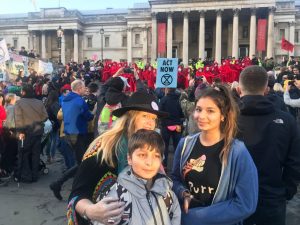 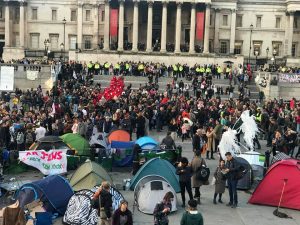 A new week dawns on the October Rebellion as rebels made an early start to swarm the financial area outside the Bank of England.

Governor of the Bank of England, Mark Carney warned in an interview on Sunday; “firms ignoring climate crisis will go bankrupt.” A mock trial has held in the main square, “the financial system and government were put on trial and found GUILTY of perpetrating ecocide against the planet and its people.” 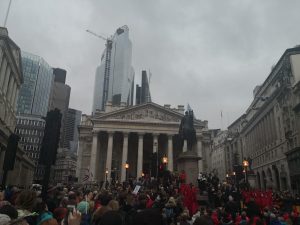 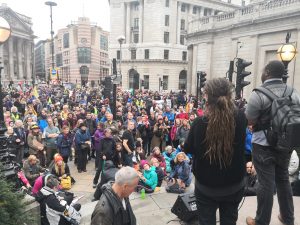 XR Buddhists mediated together in the street, while 77 year old Rabbi Jeffrey Newman was arrested and carried away while XR Jews sang Hallelujah in the background 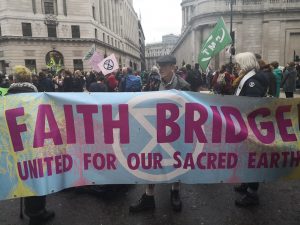 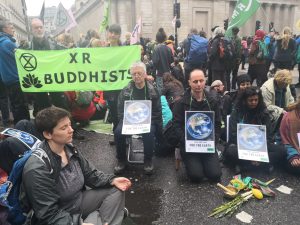 Note: some may find this clip distressing:

Rebels moved out of the way for emergency vehicles, which is part of the roadblock method; flashing lights are allowed through:

#ExtinctionRebellion crowd parts like the Red Sea to allow an ambulance through at Bank pic.twitter.com/dMVyY7Qibb

XRC members came up to show their support and leafleting with many curious city workers on their lunch break. 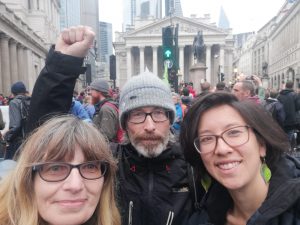 Penny shares some of her favourite signs from today: 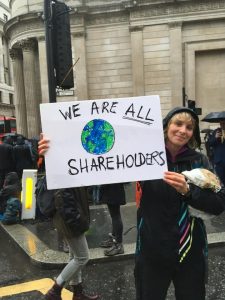 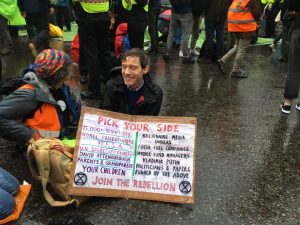 “I spent 40 years commuting to the City, and coming back today seemed quite a personal action, a ritual passage from old life to new. In all those years I never once danced to drums or meditated in the street, as today. Power to the people!” 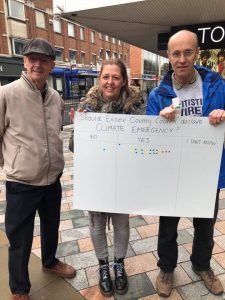 By 9pm police were clearing Trafalgar Square as news came in that Extinction Rebellion protests are now banned from the whole of London: https://www.theguardian.com/environment/2019/oct/14/police-ban-extinction-rebellion-protests-from-whole-of-london

XRC make it into the Daily Mail…again: Photos include some of our rebels; including the second photo when the red rebel brigade visited those locked on and glued to the road and an one of the five arrestables had with her message “For My Kids” and a shot of morning yoga featuring two of us:

Aljazeera covered the grief march that more than 25 people from XRC joined: https://www.aljazeera.com/news/2019/10/uk-climate-activists-hold-funeral-procession-planet-191012183408672.html

Photos from Day 3 have since been found to be taken by Tomm the Lightscaper – see more of his pictures from that day here. Thank you Tomm.

Meanwhile Essex filmmaker Ben has edited a short montage from Day 3 at the love site: