Day 3 was a long day for those arrested and those supporting the five arrested. The Love site was cleared by the end of the day and we headed back to our ‘den’ offsite. Arrestables headed back to base where it was a safe space to offload and decompress.

We were all ready for some regen by day 4, taking time to recoup and recalibrate. While some of us worked on Press Releases, others were reacting to the latest information that the last remaining Global Justice site was to be cleared.

The important thing to remember (and a big difference from last time) is that the rebellion is not about the site, or the infrastructure; it’s about the people and the clarity around the three demands. This rebellion is far more fluid, allowing multiple sites to be held while simultaneously delivering 800 trees to MPs and temporarily turning Smithfield Market into a fruit and veg market!

It is a wonderful feeling knowing we are just 1 city out of 60 participating in actions around the world: take a look at what’s been going on in Montreal, Madrid and beyond.

Another five folks from Chelmsford came up to visit today; here’s what what they had to say:

“I’m thinking about my grandchildren. Something’s got to be done right now! XR and XR Chelmsford is really getting active. I’ve been doing leafleting in Chelmsford this week and engaging with the local public. It seems to me people from Chelmsford are more proactive and frustrated on the whole. Being here in London, I notice a range of ages here, which is important.”

“I’ve been quite distressed from what I’ve seen on the telly and how people and possessions have been treated. We’ve come up not only from an environment standpoint but out of concern that people’s liberties and right to protest appear to be becoming restricted.”

“I asked my headteacher, and I’ve taken the day off school to save the planet.”

“I came up because I want to protect the planet; it needs our help. I am very encouraged by the sheer numbers of XR Chelmsford members here.”

“I want to show solidarity with those people who have stayed overnight in all the rain and the noise.”

They gathered in St James’s Park meeting with local rebels who have been here since Sunday. 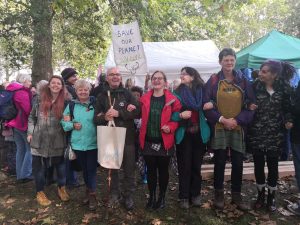 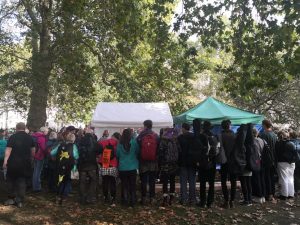 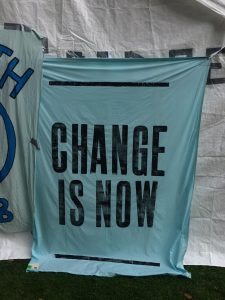 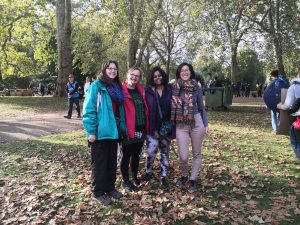 By mid-afternoon, regen was what was needed. Emotions were running high and fatigue was setting in. We made a decision to head back to base, get (mostly vegan) pizza and chill. We caught up on yesterday’s events from different angles. It was just what we all needed. Thank you for everyone’s messages of support, they have been much appreciated.

Ellie’s image had made it onto major news outlets: 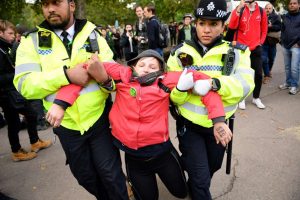 Sophia and Ellie had been caught on camera too (photographer unknown) 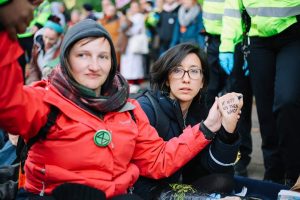 And Sarah’s strong message was captured by a photographer. 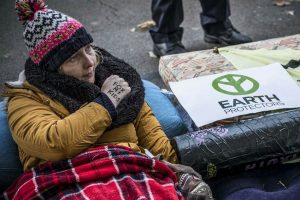 Then as the perfect antidote, we tuned into some comedy, specifically Jonathan Pie’s piece on the second rebellion.

Trafalgar Square is still being held and a new site has been established at Vauxhall Pleasure Gardens after Lambeth Council gave rebels permission to stay there. From this safe base, mass actions will continue through to day 5.