In response to the Met Police and Home Office’s quick decision to ban assemblies – members of XRC gathered in Trafalgar Square. Hear why they decided to defy the ban:

“To protest at the Metropolitan police’s decision to outlaw peaceful non-violent protest by XR London.” Steve

“To show that it’s literally impossible to ban something from people’s heart and soul. And to chill in the sun with friends.” Andy

“Despite the Greater London Section 14 being in place I went up to the XR Assembly at Trafalgar Square today as I refuse to accept that I am not allowed to peacefully protest against the ongoing eco-crimes against our natural world which Is our life support system.” Les 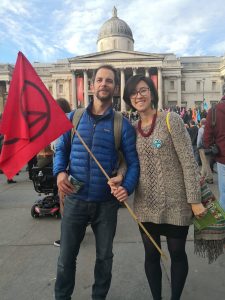 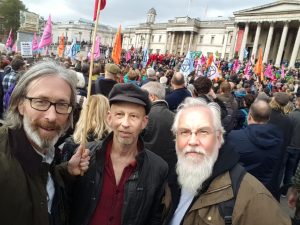 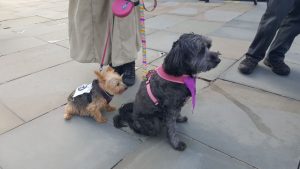 In the thick of it, more arrests took place including George Monbiot, environment journalist, Jon Bartley, co-leader of the Green Party and one XRC member.

And in Chelmsford the leafleting team were out canvassing opinions on the climate emergency: 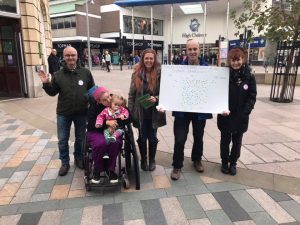 An early start for two rebels – ready for interview on BBC Radio Essex at 8pm.

Peter and Sophia were responding to the city-wide ban on XR Autumn Uprising protests, however footage had just started coming in regarding the incident at Canning Town – on the spot they were asked to respond on the action.

You can listen to the interview here: Starts at 2 hours and 6 minutes: https://www.bbc.co.uk/sounds/play/p07pg85h

There has been healthy discussion of this incident in the Chelmsford Supporters group and it has reignited the need to discuss how we practice radical inclusivity and mitigate for power. In our upcoming debriefs and meetings we’ll discuss how we could improve things locally, what we can learn and apply in XRC.

Meanwhile back in London, John, who we met briefly at the group meeting before the Rebellion, and his daughter headed to the XR Professionals event on Trafalgar Square. 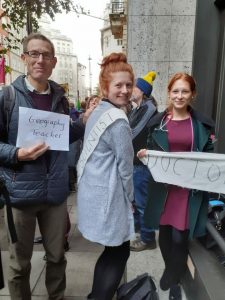 Steph was down there too; “A peaceful people’s assembly and an assertion of our right to protest.” 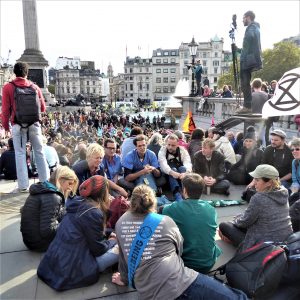 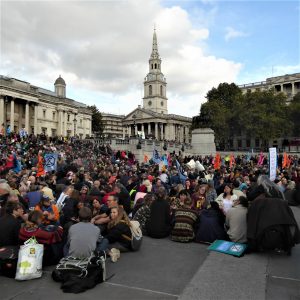 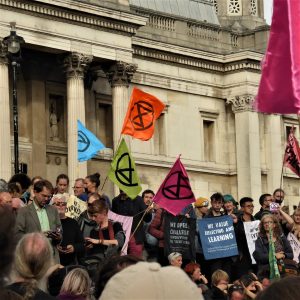 The last day of the Rebellion dawned and determined to end on an uplifting note 5 rebels headed back into London. They participated in the ‘Red Handed’ march, a symbolic closing march; “We hold up our hands to the harm we’ve done” 👐. The red hands symbolise all of our accountability in the current climate crisis. – writes an XR Colchester Tweet 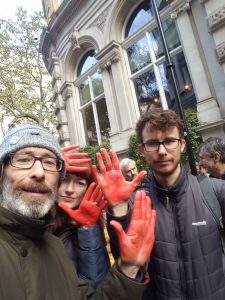 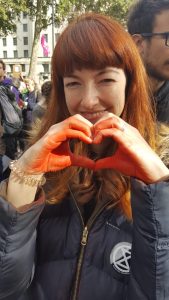 As the procession neared to Horseguards Road, we took a detour and returned to the Love Rebellion site where it all began 12 days before. St James Park looking as beautiful as ever in the early afternoon light; police stood outside the back of Downing Street, the place full of tourists. We went back to the ‘scene of the crime’ and reflected on the last two weeks, while the march headed back towards Trafalgar Square. 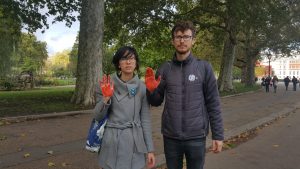 The transition ceremony was held on Trafalgar Square amongst an array of flags. One by one XR Chelmsford members headed home – drawing a close this phase of the rebellion. 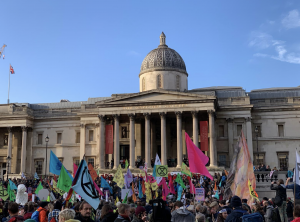 Meanwhile in Chelmsford the leafleting team wanted to end on a high as they showed up in double figures to meet with members of the public. Lynne, who’s been co-ordinating efforts added;

“Back out in Chelmsford for a final day after a busy two weeks. We plan on continuing on a part time basis next week after a weekend of rest and regeneration. The results from the boards are showing that people in Chelmsford most definitely have the climate emergency in mind. We’ve also had our fair share of knock backs which hasn’t held any of us back from going out there again and again. It’s been lovely being part of a local support network whilst the rebels in London take to the streets. Massive thank you to all the lovely leafleting gang” 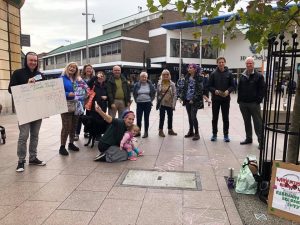 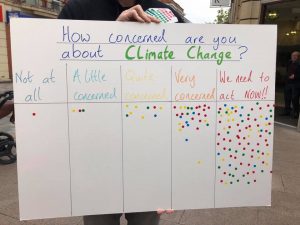 The last 12 days have been a whirlwind, many XRC newbie rebels really throwing themselves in the deep end with camping, stewarding night shifts and more.

We invite everyone who invested energy into the Rebellion to take care of themselves, catch up on sleep and self-care, routine whatever it is that you need to replenish. We invite you to take stock, consider what went well, what didn’t, what could be improved next time. We invite you to reflect on what the next phase of XR activity looks like for Chelmsford? How might we improve our outreach? Can we be better at listening? How can we share our skills inviting others to take on roles?

More than 50 folks from Chelmsford (that we know of) ventured up to London to explore, participate, support, soak up this Autumn Uprising!! And on many occasions we were able to meet and convene together – it feels like a formative experience for our local group and great to see so many friendships blossom.

A big thank you

A very generous £610 has been raised on XRC’s local Fundraiser page, the majority of that coming in during these last two weeks.

Thank you to Steve, Jonathan, Sheila, Peter, Frank, Laura and other anonymous donors.

Nick, who has been instrumental in setting up our finance infrastructure and process is delighted; “It will help our local group to be sustainable and grow for the longer term.”

Next local events coming up

Monday – Welcome to XR – Introduction for the curious.

If you’ve heard about XR in the last few weeks and want to find out more and meet local members, come along and join us Monday evening – 7pm – The Plough, 28 Duke Street

Wednesday – Heading for Extinction presentation – if you’d like to find out more about the scientific consensus on the climate and ecological crisis and the rationale for NVDA join us for our first daytime presentation.

Thank you for checking out these (almost) daily updates to get the local perspective on the rebellion.

But it doesn’t need to stop there! Your contributions are welcome!

Send it to media@xrchelmsford.org, we can work with you if you’re looking for support in editing or writing let us know too.

Signing of for the last time in the Autumn Uprising.

In Love And Rage.